Winters Bros. and its Class 3 railroad affiliate, Brookhaven Rail LLC, are developing a sustainable and eco-friendly industrial park that will include railroad access to promote the cost effective and environmentally sound movement of products, goods, and commodities on to and off of Long Island, NY.  The terminal and industrial park will be located in Yaphank, NY on 228 acres of real estate.  The new facility will provide the critical and necessary infrastructure to serve Long Island for the next 50 years.

This fact sheet provides information about Brookhaven Rail and the Winters Rail Terminal.

Who is Brookhaven Rail?

What is the Winters Rail Terminal?

The Winters Rail Terminal is a planned industrial park that will be located on 228 acres of property in Yaphank.  The facility will have rail infrastructure, including direct access to interstate rail transportation that will enable logistical transportation services for goods and commodities shipped to and from Long Island.  The project is being developed by Brookhaven Rail LLC.  The Winters family is the owner of Brookhaven Rail and has been serving Long Island since 1950 with a focus on environmental sustainability, recycling, waste management and complex logistical projects. The Rail Terminal project is expected to break ground in 2021 and will take several years to complete.

Approximately 30 percent of the property (68 acres) will be preserved for green space and conservation.  The remaining 160 acres will be used for the industrial park including roadways, railroad track, warehouses, distribution centers, and a waste by rail transfer facility to be owned by Brookhaven Rail d/b/a Shamrock Rail and operated by Winters Bros.  This facility will not handle hazardous waste, radioactive waste, toxic waste, or medical waste, but rather recyclables, construction and demolition (C&D) waste and municipal solid waste (MSW).

What are the benefits of the Winters Rail Terminal and Industrial Park?

The primary benefits of adding infrastructure to the Long Island marketplace include: 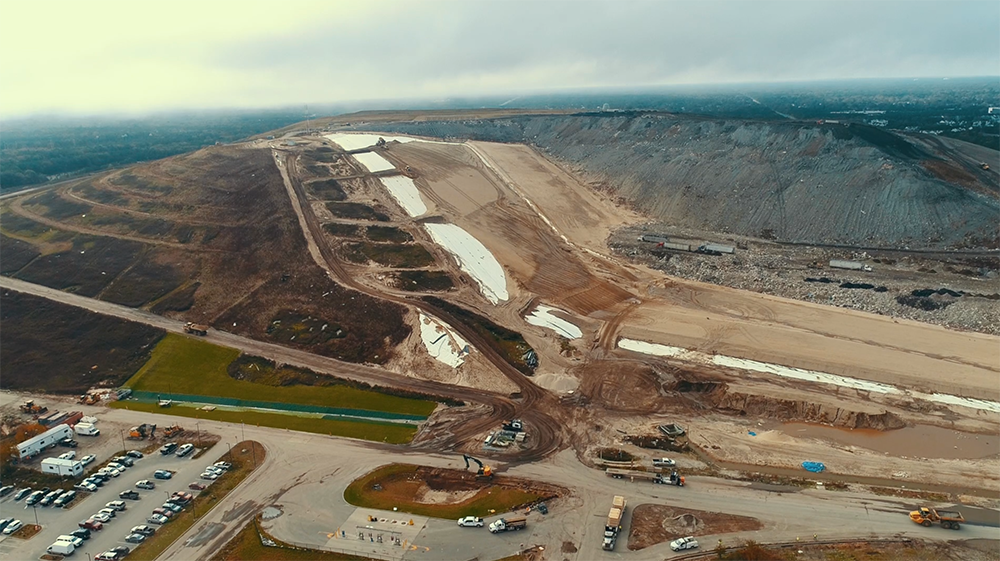 How will the solid waste be managed?

MSW and C&D waste will be delivered by trucks, unloaded inside of a building onto a concrete floor, and loaded into covered rail cars for transportation to distant landfills.  Odors, noise and dust will be eliminated as this process will take place entirely indoors.  Winters Bros. successfully operates eight transfer stations on Long Island with an excellent record of compliance with permit requirements and environmental protection.

Where is the project located?

The project is in an industrial area that is immediately north of Horseblock Road in Yaphank.  The facility is surrounded by other industrial uses including:

Why is a rail-served solid waste transfer facility part of the project?

There is a solid waste disposal crisis on Long Island which will worsen with the planned closure of the Brookhaven Landfill in 2024.  A cost-effective and environmentally sound process is needed to manage the thousands of tons of waste that Long Island’s inhabitants and businesses produce daily.  The Brookhaven landfill currently accepts about 1,100,000 tons per year of construction waste, automobile fluff from metal shredders, and ash from incinerators.  This waste will need to go somewhere and the rail transfer station will allow the material to be processed and then transported by rail to distant landfills for proper disposal.  Without a rail served facility, an additional 60,800 truck trips per year will be needed to transport this waste.

Finally, it should be noted that the rail movement of waste is not new.  New York City has been using rail to export waste since the mid 1990’s.  Today, the majority of waste managed by the New York City Department of Sanitation moves by rail.

What will be included at the rail served transfer station?

The transfer station will occupy approximately 50 acres of the 228 acres and will include:

What other types of businesses will be in the industrial park?

Mainline tracks and sidings will be constructed to enable direct rail service to businesses locating in the park, as well as distribution centers and “cross dock” warehouses where goods are received and can be quickly distributed to consumers.  Other potential businesses include bulk storage, food distributers and other commodity sales.  Again, the project will take several years to complete.

What approvals are necessary?

The overall development of the 228-acre site and the planned Rail Terminal & Industrial Park will be governed by a combination of state and federal laws and a 2016 court-approved settlement agreement which occurred prior to Winters Bros. involvement of the project.

The construction of all railroad track on the site by Brookhaven Rail d/b/a Shamrock Rail is also subject to the approval and regulation of the STB, including its environmental review process under the National Environmental Policy Act.   In addition, the siting, construction and operation of the solid waste rail transfer facility is subject to a combination of STB jurisdiction, the laws and regulations of the State of New York, and the laws and ordinances of the Town of Brookhaven.  Roadway, transportation and sewer issues will be reviewed and regulated by Suffolk County.

How much freight currently moves by rail?

In the Northeast, about 19 percent of all freight moves by rail.  However, on Long Island, only 1 percent of freight is moved by rail.  The primary reason for limited rail shipments is a lack of infrastructure (rail terminals).

More rail infrastructure and service is critically needed, especially when you consider that trucking material to and from Long Island is not as reliable and has become extremely expensive.  Some of the major factors that have adversely impacted trucking costs include higher tolls and the enforcement regulations that limit truck drivers’ hours on the road by Electronic Logging Devices.   While costs have increased, the overall number of trucks on the road has remained at a high level, contributing to highway congestion and deterioration of the roads, bridges and tunnels.

The already insufficient off‐Island transportation capacity for solid waste will grow when the Brookhaven Landfill closes.  Rail is a solution and is more sustainable with less air pollution.

Why is rail a more eco-friendly option over truck?

The Winters Rail Terminal & Industrial Park will be the greenest and most environmentally beneficial project with better results than any other transportation initiative in the past decade.

What type of locomotive will Brookhaven Rail (d/b/a Shamrock Rail) use?

How can I get more information?